Showing posts from October, 2018
Show all

On Not Being Nice in Times of Violence 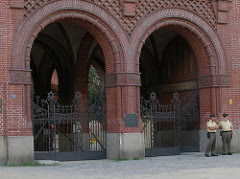 Police presence at Prenzlauer Berg synagogue in Berlin After this past week, I'm sure many of you, like me, are reeling, first from the news of pipe bombs that were sent to some of our nation's most prominent political leaders, secondly by the cowardly, despicable and apparently  racially motivated shooting of two elderly citizens at a Kroger grocery store in my home town, Louisville, KY, and finally by the horrific mass shooting at the Tree of Life Synagogue in Pittsburgh. My heart has been sighing in my prayers and meditations for the victims of these attacks and attempted attacks. I also have been reflecting on these trends and thought I'd share briefly from my experience. When I lived in Berlin (1992-1997), I lived for two years in the far eastern suburb of  Berlin Marzahn , and then three years in the East Berlin squatting and arts district, Prenzlauer Berg.  Throughout my time in Berlin, there were tensions between right wing nationalists and outsiders, leftists
Post a Comment
Read more

Hi Everybody, Pfeiffer MAPT grads and profs, August 2018 It is always such a great joy to share in my students' graduations, as I did with these great MAPT folks last August. Did you know that teaching can be considered a very special type of friendship? Theology professors are especially blessed. We get to see our students grow and mature spiritually, develop friendships with one another and with us, and increase their intellectual ability and pastoral skills. I am especially lucky because my scholarship is on the topic of friendship. I am so excited to share that I have completed and submitted drafts for my forthcoming book with Cascade Press (Wipf and Stock). The title of the book is Virtuous Friendship: The New Testament, Greco-Roman Friendship Language, and Contemporary Community. I am expecting the book to come out at some point this winter. Here is a brief description from the back cover of the book. Why do so many feel so lonely today? Are our friendships in bre
Post a Comment
Read more
More posts